SpaceX has trucked in Starlink terminals to Ukraine to keep the country online during the ongoing war. Over 5,000 terminals are in the country, the Washington Post reported over the weekend.

Plenty of ink has been spilled on the physical inflows of Starlink hardware. What’s the latest on software side of the equation? To get a better sense of how Starlink iOS and Android downloads are trending, Payload dug into data from mobile app analytics providers Sensor Tower and 42matters.

Starlink’s app has seen ~295,00 lifetime installs across the iOS and Android Ukrainian app stores, per Sensor Tower estimates shared Thursday with Payload. The lion’s share of installs came during the week of 3/10-3/16, when Starlink was downloaded 224,000 times (~76% of lifetime downloads). That’s a 14x week-over-week jump over the 16,000 installs seen from the previous seven days.

From Feb. 21 to March 19, Ukrainians downloaded Starlink 129,147 times (65% through iOS; 35% through Android). For whatever reason, the Google mobile operating system has gained share in recent days. Two key inflection points in the Ukraine download data:

Bear in mind that these are preliminary, third-party findings rather than ironclad numbers, which could partially explain the variance in reporting between the two providers. And a Starlink download ≠ an active user. Sifting through the data, we had a couple additional questions for Braelow (Payload Qs in bold):

How many days has Starlink been at the top of the respective app stores in 2022?
Globally, it’s tough to say. You’d have to tally it up country by country. However, in Ukraine, the iOS app ranked #1 overall for 3 days (March 14th, 18th, and 19th). It spent a number of days in the #2 spot as well, just behind the air raid alarm app Повітряна тривога. Moreover, since February 27th, it has ranked #1 in Ukraine among ‘Utilities’ apps for 12 days.

The Android app has been a little more sluggish, although, as noted earlier, that appears to be changing with the latest shipment. It hasn’t topped Ukraine’s Android top charts yet, however, it has ranked #2 in the country, behind the air raid alarm app, for 5 days straight (March 16th-20th). It has also topped the ‘Tools’ category in Ukraine for six consecutive days (March 15th-20th).

Do you have any sense of how many of these downloads represent actual users?
Not yet. We calculate monthly active users (MAUs) for all Android apps, but we haven’t gathered enough data for March to be able to say anything conclusively. That said, based on February’s data, it appears MAUs are trending upwards in a pretty noticeable way. I’d be happy to circle back around when we get more clarity, though. 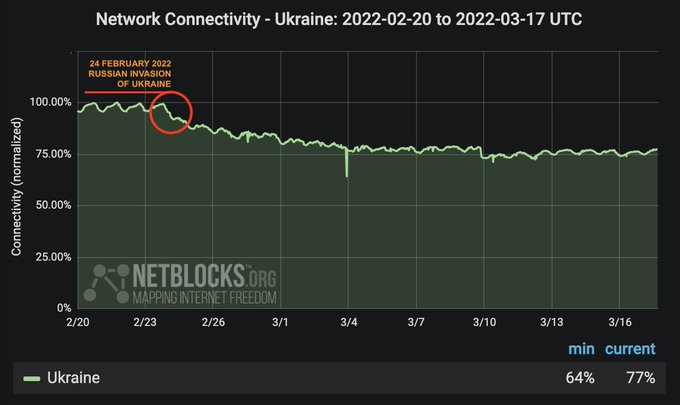 But airstrikes and cyberattacks are taking their toll. As of 3/17, Ukraine’s observable connectivity sat at 77% of ordinary levels, per internet monitor NetBlocks. In Kherson, the first city to fall to Russian forces, ISP Volia’s connectivity levels have dropped to 2% of pre-war levels, NetBlocks said yesterday.

At a time when internet connectivity via traditional means may be harder to come by in besieged cities and rural parts of Ukraine, app download data shows surging interest in SpaceX’s satellite broadband service. Hardware availability is presumably still a bottleneck, making it less likely that terminals will be distributed far and wide across the country. “Even if it’s only from the select few who have been chosen to receive these devices, it’s better than having a total absence of information,” NetBlocks Director Alp Toker told the BBC on March 1.

+ While we’re here: The FBI and US cyber agency CISA have warned satellite communications (SATCOM) operators to harden their networks. In a joint advisory issued last Thursday, the agencies say they’re “aware of possible threats” to domestic and foreign SATCOM networks. The agencies suggest that US SATCOM operators “significantly lower their threshold for reporting and sharing indications of malicious cyber activity.”

Note: This story was updated 3/22 to include additional answers from Braelow.